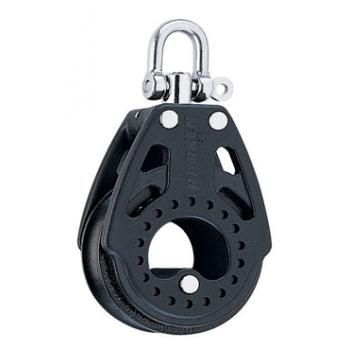 Jammed blocks, kicked travelers, and grease to lubricate the steel ball bearings.  Before 1967, that was sailing hardware—agricultural, heavy, hard to use, and a  pain to maintain.

Like many good ideas, Peter Harken’s decision to use plastic instead of steel ball bearings in his boat hardware was born of necessity. Little did he realize his invention would change the face of sailing.

By 1972, Harken blocks reigned supreme at the Olympic sailing events—34 boats at the '72 Olympic Games in Germany, and 106 boats at the 1976 Montreal Olympics. Harken became the Official Equipment Supplier at the 1984 Los Angeles Olympics and the ’92 Barcelona Olympics. The blocks were strong, dependable and exceptionally free-running. For many years, Small Boat blocks set the performance standard for Olympic and international champions.

Today, Carbo AirBlocks® are the norm for all racing and cruising sailors. These are 30% lighter and 60% stronger, and they're well-suited for the small-diameter hard line favored by today’s racers. Carbo blocks come in all shapes and sizes, including, ratchets and load-sensing Ratchamatics®.