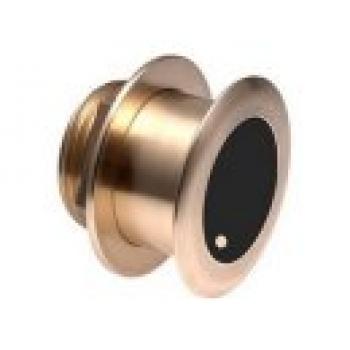 With CHIRP transducers, there is no trade-off between pulse length and target resolution.  While CHIRP fishfinders may output less peak power than a conventional fishfinder, what really matters is the energy put into the water with each pulse. Wide band, frequency modulated pulses (130-210 kHz, for example) can be very long in duration and put 10-50 times more energy into the water. Unsurpassed target detection and resolution is achieved with digital signal processing using pattern matching techniques.

With CHIRP transducers, the ability to determine the separation between fish and between fish and bottom can be a matter of inches as compared to several feet with traditional fishfinders. Closely grouped fish can now be shown as distinct targets instead of a single mass and show fish close to the bottom rather than being hidden. See graphic illustration. It is well known that different fish species and fish sizes return stronger echoes as certain frequencies.

With traditional fishfinders operating at fixed frequencies(50k Hz and 200 kHz), fish echoes may be weak or not detected at all. Since CHIRP transducer transmit pulses over wide frequency bands, this maximizes fish detection capability.